Recently I’ve faced a general error on SQL Server transactional replication – The subscription status of the object could not be changed. This was popped up on no matter what changes trying to implement – add a new subscriber, drop a subscriber, add or remove any article, etc. In other words – the replication became something like read-only.

The changes I tried to implement using SSMS as well as system procedures, like “sp_dropsubscription”, but with no luck: The subscription status of the object could not be changed. (Source: MSSQLServer, Error number: 14068). Other errors by trying other procedures I’ve got:

Msg 14068, Level 16, State 1, Procedure sp_MSrepl_changesubstatus, Line 1386 [Batch Start Line 0] The subscription status of the object could not be changed.

Replication Monitor could not reinitialize one or more subscriptions that support automatic initialization. Additional Information: An exception occurred while executing a transact sql statement or batch. (Microsoft.SQLServer.ConnectionInfo)

Even a snapshot agent was failing without saying anything useful… Then it looked like I need to re-setup a replication from scratch. This wouldn’t be something much if only one publication on a server with few articles, etc. But in my case – there are over 10 publications with more than 100 subscriptions. All the servers are in production and to re-setup replication – would cost a lot…

Fortunately, I’ve found a way to fix the replication without re-setup. Here what I found.

First, I’ve checked is there any orphaned articles in the replication? This might be done by running the script:

Success! I’ve found one article exists as a replicated object (in my case udf function), but already dropped out of the database: 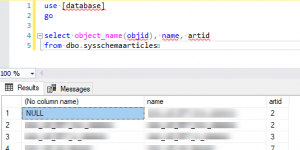 Please note, you can’t simply re-create a dropped article since it will get different object_id and will not fix the issue (just now though, instead of deleting the entries as described below, you may try to update article id, but at the moment I was fixing, didn’t thought about this option).

The next step – clean this up. It’s as easy as to delete a record out of a table. For sure, you need to know from what tables. Here you go, four tables in total: syssubscriptions and sysschemaarticles in a publisher database, and MSsubscriptions and MSArticles in distribution database. In my case, from the query above I’ve identified that artid = 2 is the candidate to drop. Before deleting, I’ve copied the entries to a backup table in case I’ll screw up something else and need to restore the change. Remember, all the things I was doing are on production environment…

Success again! After the orphaned article has been deleted out of replication, now I can do all the changes again – add a new subscriber, add a new article, etc. All back to normal!